Camping, Canning and Concerts, Oh My!!!

Last weekend we went on our annual camping trip to Lake Pearrygin in Winthrop, Wa. The group, about 50, started camping together when two of them were in 2nd grade and has grown from there. We've been going for 5 years now and it gets more fun every year! I have to say that this one has been my favorite so far. We've had a wedding, 25th anniversary, Hawaiian theme, but this year was "Sheriff Claus and his Reindeer Games". Those of you who know me know how much I love Christmas...everything about it! It takes me a week to decorate and while I complain the whole time, I'm always amazed at the transformation of my home and love the finished product! Needless to say, I've been excited about this camping trip!!!
Dave and Angie Miller host this event, and I encourage you to think "Cruise Director" as you read about this!!! We received a letter at Christmas with all the details. Events include: tent decorating, most traditional and most creative; dessert, best tasting and most creative; best costume; reindeer games; white elephant gift exchange; traditional Christmas dinner; kazoo caroling around the campfire!!!!! Due to extreme fire danger the caroling did not transpire, but we did all the rest!!!!
On Friday evening Dave became the game show host for the "Newly wed and the Nearly dead" game! Four different couples, married from one year to 28 years!! It was so fun - mostly for those of us who were laughing at all of them, while being thankful that we weren't in the "HOT SEAT"!!!! Congratulations Dan and Tracy!!! 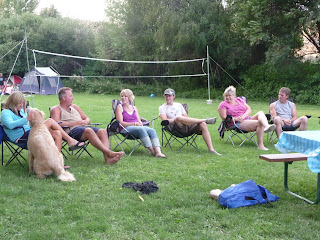 Saturday morning the tent decorating began...such a frenzy!!!! It really was a lot of fun! People had bought so many things the day after Christmas that they forgot what they had purchased! Such joy! Such delight! Almost like Christmas morning!! 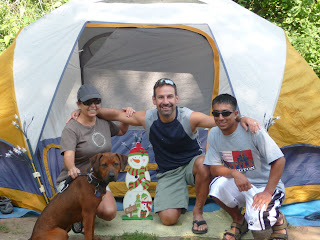 Robin, Chip and their nephew Steve posing in front of their tent. I see next years Christmas card!! 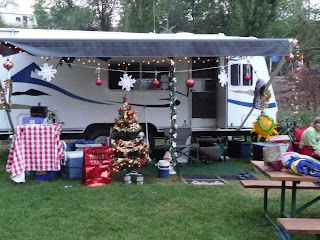 Dan and Tracy went with the "Trailer Trash" theme, which is written on their bag! They had the advantage of being the only ones with electricity!!! 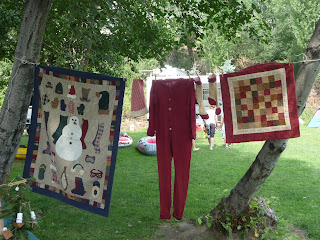 I was going for most traditional, so determined to win that I only focused on this contest, and entered no other!!!! Had to hang some diddy's on the clothesline! 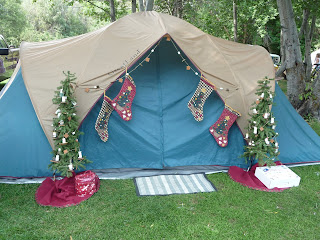 Our humble abode! Unfortunately I forgot the door mat!!! Had my Christmas jammies and a lovely Christmas throw on the bed too!! 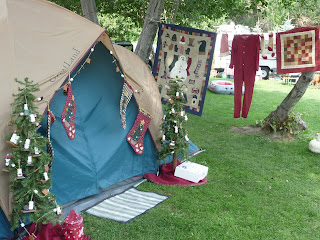 Hoping that Santa will fill all those stockings! My trees had "S'more" ornaments and garlands on them. 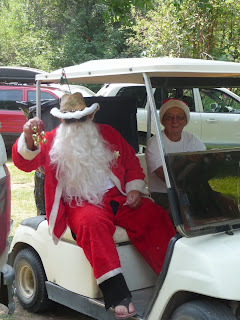 Sheriff Claus arriving on his golf cart! It was about 85 degrees out!!


The tents were judged first, and then the desserts. Announcements and awards would be made at dinner! 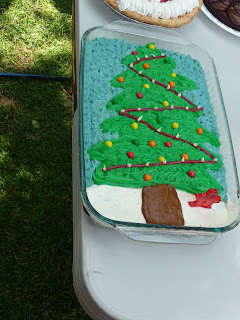 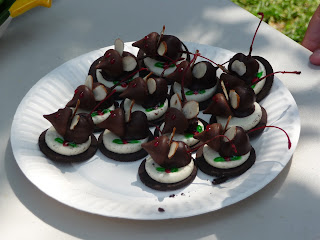 
Then, it was time for the games!!! All of the actual games are on my other camera, which has not been loading for me, so you'll have to visualize!! 36 people divided into 3 teams, red, green and white. 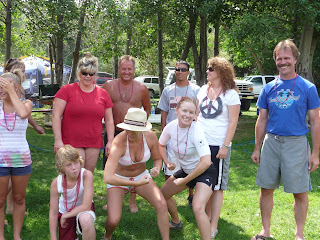 The Red Team and ultimate winners of the games! 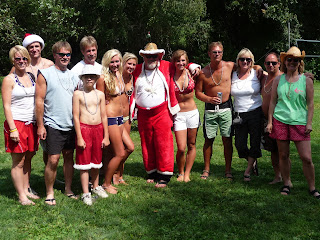 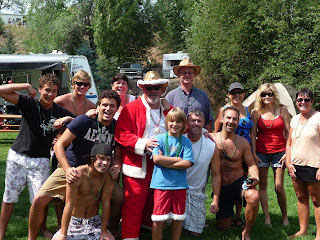 And my team, the Green Team!!! We had all the young, strapping men on our team and thought they would lead us to victory, but boy did they let us down!!!!! JK!!

We played 8 games, which took us over 2 hours. They included, but were not limited to:

1.Having tags placed on our backs with the 12 days of Christmas, which we then had to put in order, without looking at our own tags.
2.Putting on a foam nose, Santa hat and a big pillow, racing to the chimney (painted cardboard box), climbing down the chimney and racing back!
3.Standing in buckets of ice water while throwing styrofoam balls through holes cut out of a wooden snowman.
4.Kayak races, with Santa hats on.
5.Re-writing Twas the Night Before Christmas, Pearrygin style.
6.I saw mommy kissing Sheriff Claus...use your imagination!!!! (Robin, you are a great sport!!)
7.Acting out the nativity according to our assigned characters!
8.I can't remember, but it was good!!!!!!

People from all over the campsite were watching us including some from above, with binoculars ! 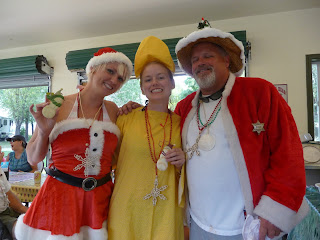 The Sheriff and his nieces, who both won for best costumes! Laura was a star but her points were being infringed upon!! 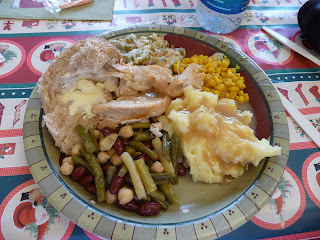 Christmas dinner, complete with Turkey, mashed potatoes, gravy, green bean casserole, and salad! We got to eat the desserts too!!!!


Winners were announced and I won for most traditional tent decorating!!! Most creative was the "Grinch on Vacation"!!! Sorry I didn't get the picture on! A big old stuffed Grinch, sitting in his lounge chair with a cocktail, pink flamingo shirt, hat and flamingos planted all around! Very Cute!!!


Sarah and Laura got Best Costumes!
Angie got most Creative Dessert and Alyssa got best tasting for her Reindeer Dump Cake, which looked like little reindeer dumps!!! It was very tasty!!

Everyone got little ornaments for their prizes and the red team got snowflake medals! 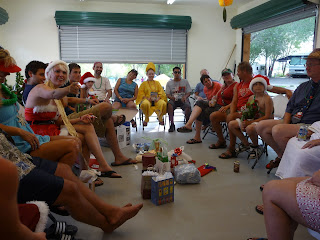 After dinner we gathered around for the gift exchange! What a doozy!! The stealing, the yelling, the negotiating!!!! It was a mad house!!! Someone even wrapped an extremely large zucchini, with newspaper and duct tape, and someone else stole it!! I've been throwing mine away! Who knew they were so valuable!!! 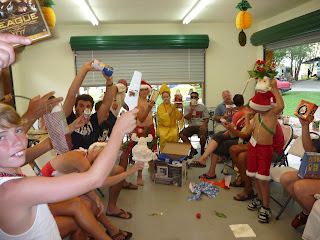 Back home to the garden and lots of canning. I made the mistake of planting two different kinds of slicing cucumbers, rather than one each of slicing and pickling, so I had to BUY pickling cukes!!! Canned 31 quarts of dill, 14 quarts of dill spears, and 2 gallons of bread and butter. Also canned 20 pints of beets and 21 quarts of salsa, froze 35 pounds of blueberries, grated massive amounts of zucchini and summer squash and have picked over a hundred cucumbers in the last 5 days!!!!!! I do love canning despite all of the work. Love having my food supply ready and waiting for that winter blast!!! Nothing like hunkering down under a cozy quilt with a pot of soup simmering on the stove, filled with summer veggies! 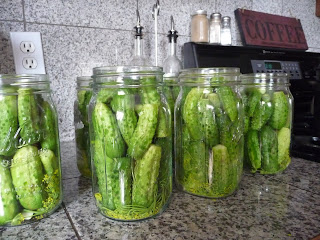 Two weeks ago, hubby and 4 girls, (I being one of them!) headed down to Qwest Field for the Kenny Chesney summer Flipflop concert tour. What a blast!!! It was so hot, but we kept taking breaks until the sun went down!! 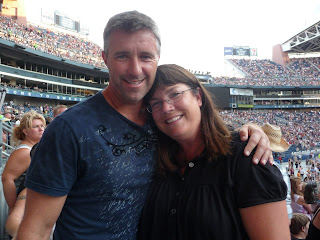 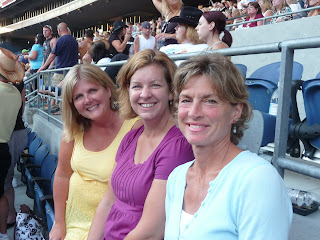 My Girlfriends, Lydia, Karen and Linda!! 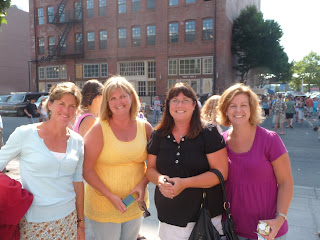 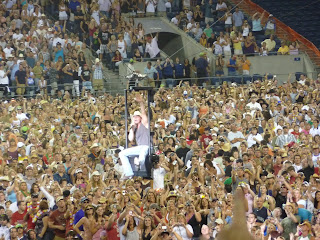 Kenny came in on a swing!!! He sure puts on a great show! It must be quite a thrill to hear 40 thousand people singing the words to every song you perform!!!!! We also saw Sugarland, Montgomery Gentry, Miranda Lambert and Lady Antebellum. They were all so good!! Great concert with great friends!!!!

Summer's almost over, and it's time to get back to reality!! Registered Ty for school yesterday, bought his books, paid his fees, and paid that down payment...OUCH!!! He is still working and actually looking forward to school starting so he can see everyone again!!! I'm really proud of both my kids for all of the hard work they've done this summer!! 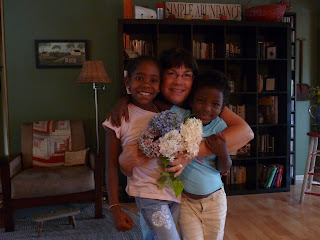 Had to share this pic of my dear friends Zodie and Amsa!! Amsa is the daughter of my BFF and Zodie is her cousin. Both were adopted from Ethiopia and are such dear, amazing little girls! They picked me this beautiful bouquet of flowers when I was visiting yesterday. Thanks girls! They are sitting on my kitchen table in the cutest little Ball canning jar! I think of you every time I look at them!!! Zodie and Amsa have become Best Friends and remind me of my dear Nettie, my cousin and best friend. How I miss you, but look forward to that glorious day when we will be together again in Heaven!!

Holly
Fast approaching, or already passed, the middle of my life! Married to my sweetie of 27 years, mom to a beautiful daughter, Ashleigh and wonderful son, Tyler. I love being a mom and a homemaker and home is my favorite place to be. I am a Christian and am so thankful that I do not have to handle life and all of it's ups and downs on my own. I live in my own little "Mayberry" and love the small town life.